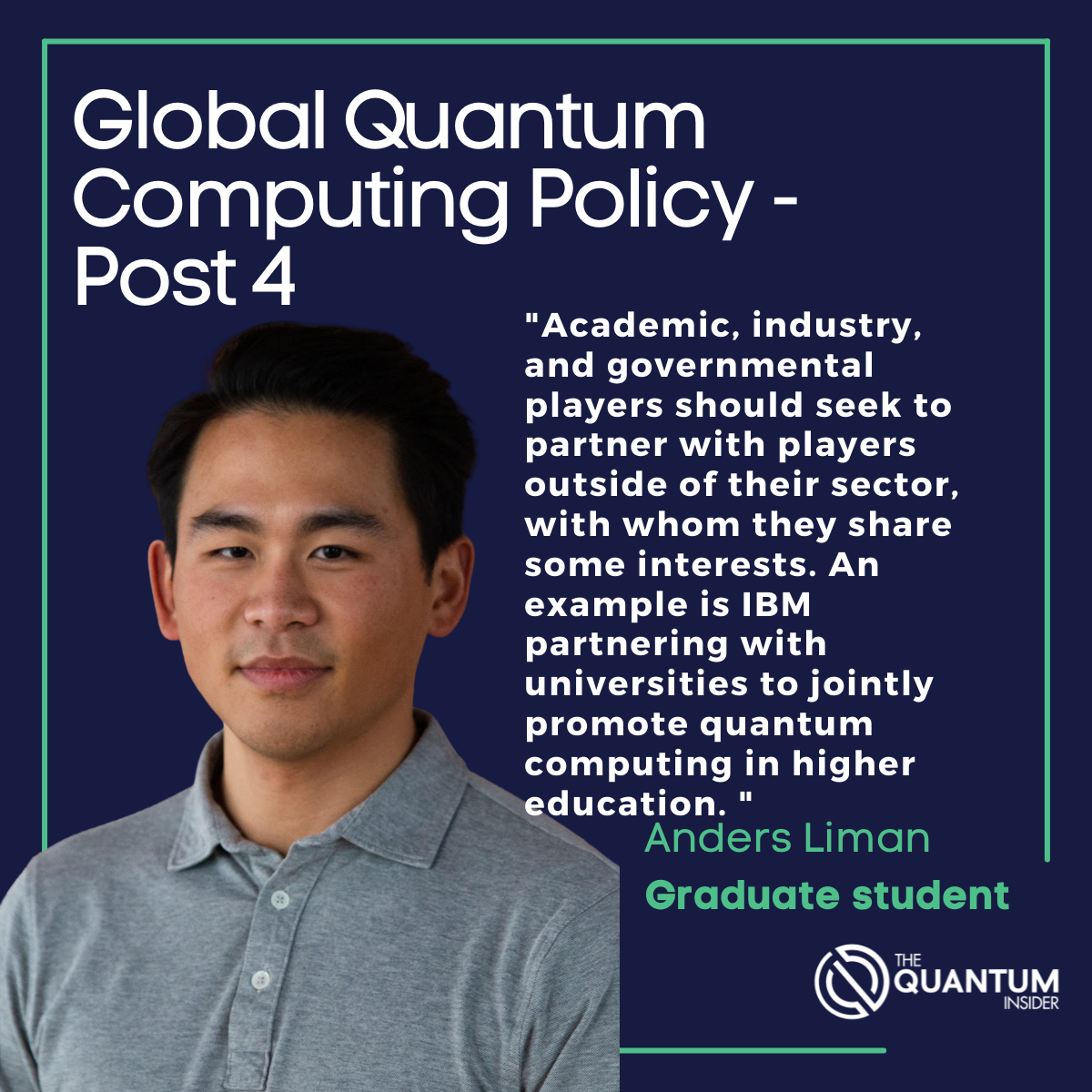 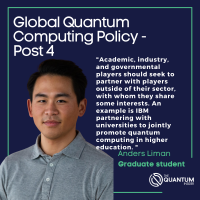 My name is Anders Liman. I’m a graduate student studying Tech Ethics and Science Policy at Duke University. I also hold a master’s in Computer Science from North Carolina State University. This summer, as part of a collaboration between Duke and Google, I researched the global quantum computing landscape in an effort to identify engagement challenges and opportunities in the field. This blog series is the fruit of this labor. You can find all the posts in the series here:
Post 1 – Intro and Overview
Post 2 – Motivations (part 1)
Post 3 – Motivations (part 2)
Post 4 – Challenges and Opportunities (part 1)
Post 5 – Challenges and Opportunities (part 2)
Post 6 – The Gap and Conclusion

One challenge that follows logically from our previous post is competing interests. It is clear that academic, industry, and governmental players approach QC with different motivations, and therefore have different interests. Within the government, different departments and offices may have different interests or emphases of interests. Likewise, large corporations and startups may differ in their interests. Regulatory approaches may be driven by one or two interests, whether by design or by limit. As such, they may unintentionally undermine other interests. Maybe a regulation does consider multiple interests, but it sees the weights of the interests differently than the stakeholder involved does. The stakeholder’s interest is nevertheless undermined despite having been considered. For example, a government may limit who gets a student visa to study QC due to national security concerns, while an academic department seeks to attract talent from around the world.

Academic, industry, and governmental players should seek to partner with players outside of their sector, with whom they share some interests. An example is IBM partnering with universities to jointly promote quantum computing in higher education. Another example is Sandia, the University of New Mexico, and Los Alamos National Lab joining forces to develop QC workforce in the state of New Mexico. Building on shared interests, cross-sector partnerships can have stronger influence and further reach. At the same time, it fosters opportunities to recognize and discern other differing interests or sector-specific interests.

Similarly, countries who share broad ideals should seek to collaborate on QC R&D. This is seen in the Quad’s (AU, IN, JP, US) governmental partnership on QC, among other technologies. This is also seen in the partnership between Canadian and German research and private sector organizations. Governments (and the private sector) should strategically pursue international collaborative efforts to promote beneficial and charitable applications of QC.

It is no secret that there is a lot of hype in QC. Many academics have rightly pointed this out. On the one hand, with its supposed promise to help solve climate change, create new materials, or improve drug design, QC is powerful and enticing. On the other hand, with its capability to compromise RSA encryption and a large portion of the information technology ecosystem, QC could be very dangerous. In reality, both the positives and negatives are often overhyped. QC is unlikely to solve climate change or undermine technology ecosystems (because of a. the currently low-quantity and -quality qubits, and b. the development and adoption of post-quantum cryptography) in the foreseeable future. However, together in the (often overblown) positive and negative lights, QC is presented as both important and urgent. This has resulted in mixed effects in the field. It has created much public and private interest, and thereby funding opportunities. Startups have perhaps benefited most in this regard, but so has academic research. The high levels of funding have no doubt assisted and expedited scientific breakthroughs in the field over the past decade. However, some argue there has also been poor (or poorly worded) research in academia and industry that led to popular articles mistakenly overstating the maturity of the field.

With the hype also come the forward-looking statements. Many companies often use forward looking statements to signal optimistic and hopeful development. Fueled by the hype and looking to fuel the hype, players in the industry tend to be extra optimistic and extra hopeful in QC. Every company, it seems, is building “the most powerful” quantum computer “with (fill in the blank) qubits” that has “demonstrated working Shor’s/Grover’s algorithm” and “ready to solve climate change and world hunger”. Although forward looking, many of these statements are not forward sounding. They are often worded as though a fault-tolerant universal quantum computer age has arrived, RSA encryption is proven obsolete, and supply chains have achieved maximum optimization.

Additionally, it is not obvious or intuitive to the public and policymakers what metrics are relevant and important. The QC race is sometimes framed as solely about the qubit count, making the assumption that more qubits translate to better performance. However, it is not so simple. Google’s Sycamore processor has “only” 53 qubits, and yet was the first quantum computer to achieve a beyond classical result, i.e., complete a computation that is impractical on a classical supercomputer. In contrast, Google’s Bristlecone processor has 72 but has not achieved a beyond classical result. IBM’s latest Eagle processor has 127 qubits, while Chinese USTC’s beyond-classical Zuchongzhi 2.1 processor has “merely” 66. This is because another factor, primarily error rates (which also determines decoherence time) is just as important, if not more so, in determining a quantum computer’s performance. Quantum computers not only need more qubits, but they also need those qubits to be high quality (i.e., high coherence time and low error rate, leading to greater error correction capabilities). However, it is difficult to benchmark progress between competitors since no metric has been agreed. The different technological approaches (i.e., superconducting, ion traps, neutral atoms, etc.) make meaningful comparisons even more challenging. More recently CLOPS and quantum volume have been proposed to measure QC performance, but they have also been criticized by some. For example, in April 2022, Quantinuum announced its achievement of quantum volume 4096, highest among available commercial quantum computers. Notably, the company’s system has 12 qubits, much less than any of the above mentioned systems, but excels at this particular metric.

Education is arguably the best tool against hype-induced misinformation. Academia, industry, and governments should take active roles in educating the public about QC—what it is, what it’s not, what it can do, what it can’t do, what it has the potential to do, etc. This includes honest reporting of academic findings and scientific breakthroughs—and equally honest reporting of disputes or retractions. This may also include educational blogs and articles explicating basic concepts in QC and providing appropriate updates to the general public.

For industry players, this also means accurate and factual statements describing the companies’ achievements. While a company’s commercial progress is exciting, and often the company’s statements naturally match this excitement, the verbiage should nevertheless not be inflated or misleading. When forward-looking statements are used to describe a company’s plan, vision, or ambition, the company should include appropriate disclosure informing readers the expectant yet uncertain nature of these statements. (For an example of this, see this press release by Rigetti.)

Industry has largely dominated the metrics and standards conversations in QC. This is partly because industry success is more contingent on quantifiable performance; it is also because strategic metrics can be used to establish leadership—companies with a high-qubit processor emphasize qubit counts, while companies with a low-noise processor prioritize error rates. However, as the QED-C points out, many variables (e.g., qubit count, error rates, circuit depth, qubit connectivity, etc.) are relevant when assessing QC performance. Governmental standards agencies (e.g., NIST in the US, BSI in the UK) should therefore, in collaboration with academia and industry, develop common metrics and standards to measure QC performance precisely and impartially. For example, NIST and the DHS are leading the post-quantum cryptography standardization efforts in the US. Additionally, members of the QED-C are jointly developing open-source performance benchmarks and intermediate representation for QC. These will provide helpful guidance for productive evaluation of QC systems and hype moderation. Furthermore, while many publicly-traded QC companies have published public roadmaps, they often vary in methodologies, specificity, and levels of idealism. A common roadmap may prove to be an accessible and useful tool for the public to assess the state of the field. Funded by NIST, SRI International is collaborating with industry and academic partners to develop the first-ever quantum technology manufacturing roadmap in the US. The roadmap seeks to “identify common needs and challenges, assess supply chain barriers, and provide a detailed analysis of various technology and manufacturing gaps” in the US. 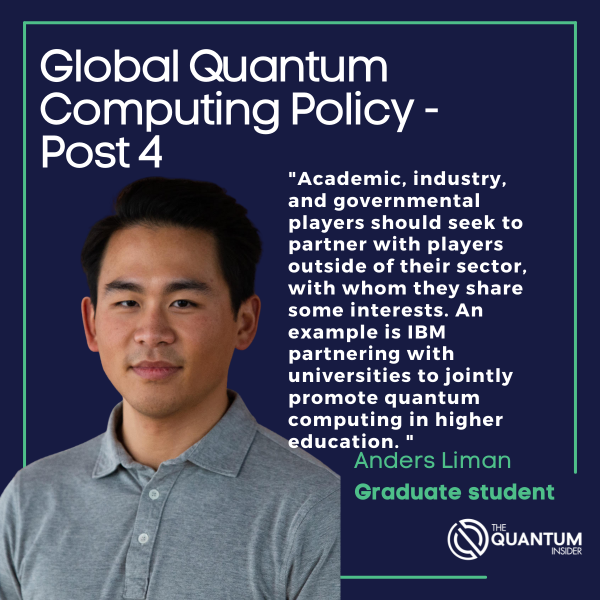