Sifting through the Clouds: Polish Researchers Will Test the Utility of Quantum Algorithms for Satellite Imagery

A group of Polish interdisciplinary researchers at Quantum Cosmos Lab and KP Labs study the usefulness of quantum algorithms in detecting clouds from multi- and hyperspectral satellite imagery. Responding to a call for space research from the European Space Agency – ESA in late 2020 via the Open Space Innovation Platform – OSIP, the project has been selected to proceed to the implementation phase. A team of five from both startups will conduct modeling techniques of the Quantum Support Vector Machine – QSVM algorithm in the IBM cloud-based superconducting quantum computer.

In the course of this year, the QSVM will sift and classify cloudy regions from large volumes of satellite imagery. Cloud pruning may dramatically reduce the size of the downstream data and therefore facilitate the transfer, storage, and analysis. Understanding feature relevance is a critical need in large data satellite sets, especially those involving Earth. The project team already shared some of the results from pilot studies with the multispectral satellite imagery from the U.S. Earth observation Landsat 8 launched in 2013.

Based in Krakow, Poland, Quantum Cosmos Lab had already been featured in The Quantum Daily by my colleague, James Dargan. As a space devotee myself, though, what hooked me is that Quantum Cosmos Lab is located at the Institute of Theoretical Physics in the Jagiellonian University. This university is recognized as the oldest in Poland and one of the first in Europe. Notable scientists who have revolutionized astronomy and quantum cryptography have walked the halls of the Jagiellonian University, including Nicolaus Copernicus and, of course, Artur Ekert.

At the backdrop of this uniquely rich historical legacy, the interdisciplinary team at Quantum Cosmos Lab focuses on fundamental theoretical research in quantum physics, quantum gravity, and quantum cosmology. Their approaches are forward-thinking because they leverage both the advances in quantum computing and the growing array of quantum space technologies, including QKD, to research these areas. They also keep in mind the potential commercial implications of their research in a growing billion-dollar space economy.

Jakub Mielczarek is the Founder and Principal Researcher of Quantum Cosmos Lab. Besides a doctorate in physics, Jakub has a dual master of science in theoretical physics and astronomy and a noticeable entrepreneurial streak. Jakub co-founded Garage of Complexity and Space Garden. I met Jakub shortly ago and discussed the challenges of extracting valuable data from vast satellite data.

“In the European Union, we have the Earth Observation Copernicus Programme that generates dozens of terabytes of data daily. This amount of data produced and stored is huge. Poland is also the satellite data storage center for the Copernicus Sentinel constellation. The data itself is useless if you cannot extract relevant information and distinguish what can be used for different purposes.”

QSVM builds on the most widely-researched machine learning algorithms in classical computers. The support vector machine is trained from a dataset to predict, recognize, and classify if an observation matches a particular class. In this case, the QSVM would be trained under a completely different operating structure and computing architecture to identify and classify if there is a specific cloud or not in a given satellite image. Image resolution ranges vary between high (less than one meter) or low (ten to hundreds of meters). The project will also compare the results obtained using quantum algorithms and their classical deep learning counterparts to validate the success rate benchmarked by computational time and the type classification.

Jakub emphasized the unique value proposition of the team’s project.

“In the space industry, it’s normal to plan far ahead of time, years, even decades, so our goal is to investigate based on the current knowledge whether quantum algorithms present advantages in space technologies and space services for certain computational problems and also for data processing.

The quantum algorithm we propose to use has shown to give advantages to classical algorithms to process the data and extract relevant information. There is a so-called exponential speed-up with respect to the classical counterparts. However, this is a theory given the current implementations of quantum computers, the noise, and the limitation of the number of qubits. It’s not guaranteed that we will get to that point. The current challenge is to verify that by having this vast amount of data and the near-term quantum computing advantage, we will benefit from using quantum computers in about ten years from now or earlier if everything goes well.

Clouds are prevalent. Dealing with clouds is the type of basic problem that we can start with to test a quantum algorithm’s exponential speed-up. We want to have effective methods to distinguish between the cloud, water, or ice that might impact the visibility of observation of the ground. And from the viewpoint of meteorology, atmospheric physics, and climate change, which is very important these days, you might be interested in a refined understanding of the cloud cover of Earth.”

Given his extensive trajectory in academic research and commercial applications, Jakub and I deliberated on the emerging landscape of quantum computing and the potential implications to the space industry. I asked Jakub about his thoughts on future space applications.

Quantum Cosmos Lab and KP Labs in Poland are already preparing for the implementation phase of this project with ESA. The new and exciting synergies in quantum computing and space applications are just starting. 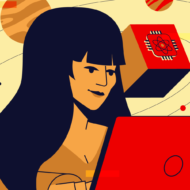 Monica Hernandez
Research conducted & personal views expressed are my own. To continue reading, set your coordinates to: moni-07b.space.