Organizations tend to do two things when faced with oncoming waves of disruptive technologies: fight it or adapt to it.

Not JSR Corporation, a Japanese-based global leader in materials and life sciences innovation.

JSR’s current proactive approach to pursuing the possibilities of quantum computing and new quantum technological development exemplify the company’s DNA that thrives on using change, innovation and collaboration to navigate both the opportunities and challenges of uncertain times, according to JSR CEO and Representative Director Eric Johnson and Chairman Emeritus Mitsunobu Koshiba.

Johnson and Koshiba said that there is a mix of scientific curiosity and recognition of the pending business disruption that is driving the company’s exploration of quantum technologies.

The company sees the known unknowns in quantum. They believe quantum will impact their business, even if it hard to predict exactly the breadth and depth of that impact. But, there are a lot of unknown unknowns in the space, added Johnson, who has been at the helm of JSR since 2019 and has been with the organization for 20 years.

“We think that quantum is not just interesting, scientifically, but it is also potentially disruptive and coming on in an exponential way,” said Johnson. “I think there are whole new business models out there that are emergent —  it could be sensors, it could be communication, security, or some other quantum technology. We have that quantum data mindset that maybe we won’t be the Amazons of the space, but we will be ready to support those Amazons.”

“In the material science space, you just got to be there — whoever is not in quantum, is gone.”

Johnson believes that quantum technologies will become integral to operating in the materials science field.

“In the material science space, you just got to be there — whoever is not in quantum, is gone,” he added. “But there are other spaces that are yet undefinable that I think are just as interesting.”

According to the executives, quantum technologies offer benefits — and challenges — beyond just how they can be used commercially, ones that are often not mentioned in typical conversations about the quantum era. Koshiba said that quantum technologies will likely be a necessity if society is required to switch to more sustainable alternatives to current computing styles, a growing possibility..

“I do think that the semiconductor industry is booming right now, but it’s not sustainable,” Koshiba said. “Think how much energy a data center uses and how much total energy they use globally.”

In the future the semiconductor industry will use more and more energy, Koshiba added. “That is probably one of many inconvenient truths about the future of semiconductors.”

The long-term cybersecurity ramifications of quantum also make it a prime national security concern and the company wants Japan ready.

JSR hasn’t suddenly discovered quantum. The company would be placed firmly in the pioneering category of companies investigating quantum technologies.

“When I came in for an interview with the JSR executive team, they consistently communicated the same message: We want to be able to engage the best, brightest, regardless of location, and invest in it aggressively.”

Quantum found a home at JSR about a decade ago because of the company’s culture, which relies on innovation and creativity to operate in a largely unknowable technological environment. Johnson said the JSR innovation gene was detectable in the company DNA  from his first interview.

“When I came in for an interview with the JSR executive team, they consistently communicated the same message: We want to be able to engage the best, brightest, regardless of location, and invest in it aggressively,” said Johnson. “The only thing we know is it’s unknowable, so you have to make bets in order to get visibility to these things. And it turns out, it doesn’t, you don’t need to break the bank to do these things as part of a holistic approach to real research.” 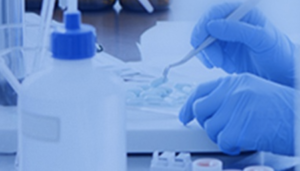 Koshiba said that growing a business in a tough environment — like materials — over decades and in various economic climates builds these types of values.

“Being a materials supplier, we are kind of at the end of the food chain,” said Koshiba. “In a sense, this puts us at a disadvantage, but also same time, it’s an advantage to us. You know, We see industry trends in automotives. We see industry trends in semiconductor technologies. We can also see trends in healthcare, or life sciences. So I think being in the end of the food chain, we can see we can have a holistic view of the future. So I think, you know, that really makes it easier to challenge or explore the new horizon than the other companies.”

“Nobody knows what’s going to happen in the future, but things are accelerating. So in a sense, you really have to capture the macro trend and invest in, for example, AI or quantum or synthetic biology, or carbon neutral.”

This attention to trends offers the team insights on advanced technologies, such as quantum, and guides the company in how they invest.

“I see that quantum technologies can be used everywhere, just as AI devices can be used everywhere, but, also, at the same time, I see a lot of practical issues as well,” said Koshiba. “Nobody knows what’s going to happen in the future, but things are accelerating. So in a sense, you really have to capture the macro trend and invest in, for example, AI or quantum or synthetic biology, or carbon neutral.”

Koshiba currently serves as vice-chairman of the Japan Association of Corporate Executives, a major Japanese business advocacy group and is committed to improving the quantum industry in Japan, which many experts see as a step behind the top industrial nations in developing their quantum ecosystems. He is working to change that.

As a global company with its research and development home still firmly in Japan, Koshiba recognizes that the effort to build Japan’s quantum prowess will go right to the core of what has made Japan a leader in technology: competitiveness.

“My first approach to quantum is: how can we revive the competitiveness of Japan?” said Koshiba.

He added that uniting companies, research institutions and universities is also part of the national effort.

“We decided to create a consortium with IBM Japan called the Quantum Innovation Initiative, which consists of the University of Tokyo and Keio University and our corporate members, including chemicals companies, banks, along with many different industry segments. So, this is a core group of the quantum initiative in Japan,” Koshiba said.

Along with JSR, the list of companies include leaders such as Toshiba, Hitachi, Mizuho, MUFG, DIC, Toyota and Mitsubishi Chemicals.

Japan has several strengths that they can build on to catch up with the progress in quantum technologies made by other countries, such as the U.S. and China.

“We are also good at controlling microwaves and we have reasonable expertise in cryogenic technologies. So, I do think we have the engineering background necessary to support a quantum ecosystem, just as we do with photoresist to support the semiconductor industry.”

The country has a long tradition of engineering and scientific prowess. In fact, that prowess is evident in quantum computing right now.

“If you look at a picture of those quantum gate-type of computers and you see those wires, those wires were made in Japan,” said Koshiba. “We are also good at controlling microwaves and we have reasonable expertise in cryogenic technologies. So, I do think we have the engineering background necessary to support a quantum ecosystem, just as we do with photoresist to support the semiconductor industry.”

Future Outlook: Beyond the Bets

JSR has already invested in quantum internally, but they have also used investments, acquisitions and strategic partnerships to make bets on quantum. Johnson said the company aims for smart, focused investments in quantum. He includes the company’s position in Cambridge Quantum as an example of that investment philosophy.

In the future, JSR leaders expect that quantum science could touch several areas of JSR’s products and services. He lists optimizing materials and, specifically, photosensitive materials as some of the more obvious ways that the company is exploring — and expecting to exploit — quantum science. But there are other increasingly interesting places where the technology could have future impact. Life sciences is one, Johnson said.

“We have our life sciences franchise, and one of the real interesting things about Crown Bioscience International, which we acquired, is they have a leadership position in mouse models,” said Johnson. “By taking tumors and cultivating them, you can have repeatable experiments. With a large library of donated tumor samples that are all sequenced, you can start to get really interesting insights into drug response across a cohort, but also to start to try to analyze for companion diagnostics.”

He added that they have also started a research initiative with Cambridge Quantum investigating quantum machine learning.

The pursuit of quantum requires a balanced, measured and holistic approach.

“There are a lot of smart people working on quantum, but what comes through is that nobody knows for sure,” said Johnson. “So, you have to spread yourself out, you have to look at how these things are going across the whole area.”

Johnson said the company’s investments in quantum are reasonable.

“We don’t have to make huge bets today — Looking over the resource allocations, it’s not huge,” said Johnson.

“If you told me, there will never be a direct product from quantum, I would still want to explore it because of the cultural advantage of engaging in this space, of enabling our people to think differently. That, in itself, is hugely valuable. And that’s what’s happening today.”

Reflecting back on JSR’s innovative drive, though, he said that the company can’t NOT explore quantum.

“If you told me, there will never be a direct product from quantum, I would still want to explore it because of the cultural advantage of engaging in this space, of enabling our people to think differently,” said Johnson. “That, in itself, is hugely valuable. And that’s what’s happening today.”

Matt Swayne
Matt Swayne is a contributor at The Quantum Daily. He focuses on breaking news about quantum discoveries and quantum computing. Matt enjoys working on -- and with -- startups and is currently working on a media studies master's degree, specializing in science communication.

Subscribe to get the latest news, offers and special announcements.