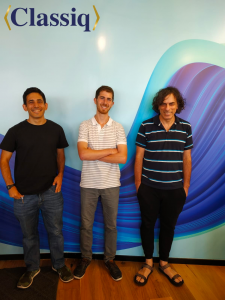 Within the next few years, quantum computing is projected to make tectonic changes in huge industries.

To prepare for the quantum era, leading companies have already entered the field, trying to develop game-changing quantum algorithms for their needs.

While the quantum computer hardware development is accelerating fast, the software is still a major bottleneck in the way to quantum advantage.

The quantum software stack is still in its infancy, thus limiting the ability to create quantum algorithms and applications.

Classiq builds the next layer of the quantum software stack, increasing the level of abstraction and allowing developers to implement their ideas and concepts without the need to design the specific gate level quantum circuit.

The company follows much of the classical path in computer-aided design (CAD) technologies in order to enable practical and efficient development of quantum algorithms.

Adaptation of this ground-breaking quantum algorithmic design framework will lead to the next leap in quantum algorithms development, increasing both creativeness and efficiency of the developer.

Classiq, which is the first Israeli startup in the field of quantum computing software, has raised 4M$ from Entrée Capital.