Gemma Milne is on a mission to improve science communication. She should be well placed having seen it from both sides of the table. After starting her career in marketing, actively looking to generate hype, she has built a career around explaining science and technology to the general public.

“The role of the communicator in science and tech is both undervalued and not well taught”.

Milne points to science communication courses, where the focus is on teaching people to remember new facts. “I don’t think there is enough emphasis on encouraging critical thinking and allowing for understanding the broader context”. This eternal tension between science and the commercial world is a central theme of Milne’s upcoming book release, Smoke and Mirrors: how hype obscures the future and how to see past it.  An academic has to constantly question her work and conclusions and caveat that results only work in certain contexts. Conversely, an entrepreneur is encouraged to test and sell her offering, even when only half done. Whilst watching “5-minute pitches” at start up conferences, Gemma got frustrated seeing people using derivative, simplified, narratives to raise money and then going on to inevitably disappoint bamboozled investors. Similarly, it was sad to see potential game-changers unable to communicate the subtleties of their proposition, or not having the confidence to explain important nuances.

There was also a more personal incentive: “One of my life dreams is to help my Mum understand why maths is so fucking cool. I want her to appreciate that Euler’s theorem is beautiful.”

All this came together initially in what Milne termed an “angry, hype-busting book”. This has since evolved into a refreshingly balanced appraisal of the hype machine in the scientific world. Smoke and Mirrors covers topics ranging from Cancer, Nuclear Fusion and indeed Quantum Computing.

Here at TQD, we clearly lasered in on Milne’s chapter on Quantum Computing (QC). Whilst most of our readers will be familiar with the basic concepts and keep up to date on the latest trends, we would encourage you to read Milne’s take. It will give you a fascinating ride through the confident talks by Whurley at SXSW in 2018, guide you through the complexity of noisy quantum computers, and concluding in a thought-provoking debate on how to manage appropriate communication around QC.

Milne is keen to stress the responsibility of science writers in expressing their subject matters. She even admits to being guilty of simplification herself, referring to writing a piece reducing quantum computing to qubits being able to do more than one thing at the same time.

“It sounds basic, but words matter”.

Milne says that it hasn’t been easy finding a solution: “If there was an answer, I wouldn’t need to write this book”. Glibly, she suggests you could have a guide where PhDs have to do a business course, or force entrepreneurs to make sure they understand the science they are selling. More practically, she places a lot of importance around getting people to love science and tech, whilst also allowing them to understand the important nuances.

“In writing the book I was really aware of giving the theoretical minimum”. Theoretical minimum being the approach expounded by Susskind and Hrabovsky: the idea is to give the reader the foundational knowledge to allow them to understand the detail. In QC this doesn’t have to be a gushing explication of Schrodingers cat or Qubits but involves laying out 5-6 concepts to paint a map of the industry. “Once you know the nodes, you can pull the puzzle together. People will be able to understand QC at one point if we take the approach of explaining the basics first (without getting rid of the important nuances).”

Do we need to do this at all? It’s something Milne reflects on a lot. As far as we know it looks like QCs will be used by industry and consumers will only interact with them indirectly. Milne likens this to the Internet of Things (IoT) industry, which garnered a lot of attention several years ago in Gartner’s hype cycle. The technology wasn’t explained well at the time and people saw it as cool for a while; now it’s ridiculed from a consumer perspective, people associating it with internet connected fridges. Yet, IoT couldn’t be doing better: Factory automation, car telematics, remote payments, are all using IoT technology without our explicit acknowledgement.

Similarly our computers in fridges (at least that’s one way to describe superconducting QCs) will continue to be developed by PhDs and corporate research departments, whether consumers understand it properly or not. Contrast this to AI where the public may soon need to understand and interact with various levels of artificial intelligence, and comprehend the practical, moral and ethical implications around doing so.

Indeed, there may be no escaping the “hype machine”. According to Milne, if you’re excited about QC, you will be part of the hype machine just by talking, tweeting and writing about it. “We have had a lot of hype already in QC and this has spurred investment and interest. Could we die down a little bit whilst people are left to get on with it, maybe…”

Milne suggests we continue to work on improving our approaches to explaining how we talk about QC. If hype derails the path of QC, the risk is slowing down the passage of science. However, if we get to a proper QC we should be able to answer some potentially fundamental questions we haven’t been able to answer before. At TQD, we are torn. We (naturally) echo the importance of clear communication and explanation. Yet, we also note that hype hasn’t really played out in-to huge investment rounds (at least not compared to AI). We want to see more investment and more support in the QC space.

Milne’s favourite chapter to research and write is titled Finding Life Elsewhere, covering the search for extra terrestrial life. This took the book down a more philosophical route and reminds us that science should not be divorced from philosophy. As we pursue better and deeper answers on how the world works, we are naturally drawn in to questions starting in “why” rather than just “how”.  For Milne, its important that we embrace science precisely because of its importance in helping us answer life’s bigger challenges and questions.

“By presenting the facts, and communicate in the right way, we can build a better world.”

Gemma’s first book, “How Hype Obscures the Future”, is available in most book stores and online from 23 April. You can pre-order it here. 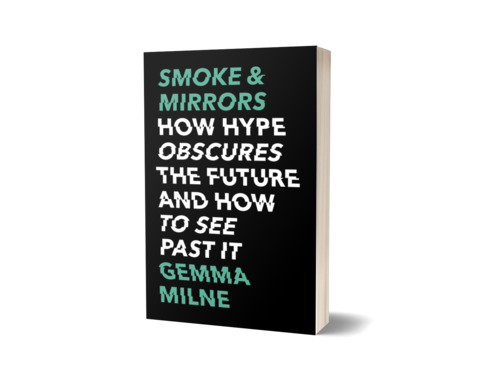