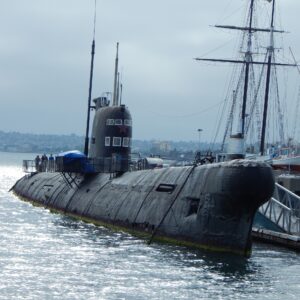 The Hunt For Red October, a classic in the chase/war/espionage genre. Or in a lighter note, the great comedy Spies Like Us. In the 1980s, the scenario of a bitter Cold War, the threat of nuclear apocalypse, Ronald Reagan on the one side and Mikhail Gorbachev on the other, was a reality that kept me up at night as a small boy.

Hollywood depictions aside, it was all serious stuff. Close shaves in 1962 and 1983 could have ended humanity, putting us back to the Stone Age (an improvement).

And then a thaw set in. Glasnost and Perestroika. Gorby and his birthmark became chillaxed. The world, it seemed — at least on the surface — was a nice place to live in.

‘It seems that the initial reports that one of our submarines was missing were not completely accurate. The submarine in question… is commanded by Captain Marko Ramius. Apparently he’s suffered a kind of mental or nervous breakdown. Just before he sailed, he posted a letter to Admiral Yuri Padorin, in which he announced his intention to, to fire his missiles on the United States…’

Recently, though — say over the last decade or so, the geopolitical climate has once again turned super ugly, with the internecine war in the Middle East, the threat of Putin’s Russia and North Korea’s obdurate stance against everybody adding gasoline to the fire.

And the Trumpter’s rhetoric of ‘America First’ in the White House is not helping the situation an iota, either.

Quantum technologies can be a disruptive technology that can change the game forever, creating military equipment which can be devastating and, at the same time, so accurate it could save countless lives.

Let’s hope we gravitate to the latter, for all our sakes.

Referring to The Hunt For Red October was no accident, because it is underwater, in the realm of the deep, where the arms industry —  and in particular undersea warfare using quantum technologies —  could really change the geopolitical landscape.

The tried and tested underwater navigation system of active sonar, radar navigation for acoustic detection et al are technologies that can successfully be implemented to sustain the all-important ‘stealth mode’, where a submarine can go undetected for days or even months in the icy depths.

‘This is a revolution not unlike the early days of computing. It is a transformation in the way computers are thought about.’

Some experts in the industry, however, fear submarine stealth abilities will be under pressure to get better because of low-frequency sonars that are highly sensitive, along with advanced optical sensors based on satellites, that will be able to bypass stealth systems based on acoustic hardware.

The potential in quantum technologies is astonishing. Quantum entanglement, the quantum phenomenon of quantum particles being bonded no matter the distance between them, could solve some of the problems in warfare regarding underwater communication, navigation and detection. It is only the coherence times of these entangled states, delicate at best, that must be sustained and lengthened to make the technology a viable option in the future. 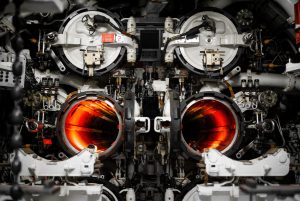 Photo by Philipp Deus on Unsplash

Quantum radar, then, could compute vast amount of data (noise), possibly distinguishing it from external noise via its powerful sensors fuelled by superposition and entangled quantum states.

So the United States military, along with other western countries, will be crying buckets over the Superconducting Quantum Interference Device (SQUID), a piece of technology currently being researched in China at the Shanghai Institute of Microsystems and Information Technology and led by Professor Xlamong Xie along with his team of experts. The SQUID is based on cryogenic liquid-nitrogen-cooled architecture which, under tests, was able to reduce the problem of noise in the system and identified metal objects deep in the ground from the standpoint of a helicopter.

In essence, the SQUID isn’t just a souped-up metal detector, but the world’s best submarine detector, too, using quantum technology to create an ultra-sensitive magnetometer.

Up in space as well, satellites could play a big part in detecting submarines. And it is China again that leads the way. Already this year, Chinese scientists managed to entangled photon pairs from a distance of more than 1,200 kilometers via two satellites. The photon pairs, miraculously, were proven to have sustained their entangled state over large distances. If the SQUID technology could somehow be harnessed this way, who knows what that could mean for the viability of underwater warfare in the future.

So, it looks like quantum technology will be here to stay, creating technology in both navigation and detection systems that can have an equalizing effect on the space.