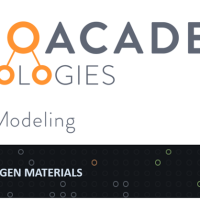 In May 2022, the Montreal-based software company Nanoacademic Technologies Inc. released its spin-qubit modeling tool QTCAD to the quantum academic community.

After a few years of development, Nanoacademic’s expertise in quantum transport simulations, large-scale atomistic software development, and computational quantum physics crystallized into an advanced simulation tool addressing the specific needs of quantum hardware designers. QTCAD is now commercially available for academic, government, and corporate quantum researchers worldwide. In addition to distributing this state-of-the-art code, Nanoacademic is now committed to supporting its customers’ R&D by facilitating their quantum device design workflows and developing new QTCAD features at an accelerated pace based on continuous feedbacks from its users and beta-testing partners.

Quantum-Technology Computer-Aided Design (hence “QTCAD”) is a finite-element simulator used to predict the performance of spin-qubit devices at sub-kelvin temperatures before prototype and series manufacturing operations. This unique tool is a significant cost-saver enabling exploration of many design scenarios in semiconductors.

The development of QTCAD critically benefitted from scientific collaborations with world-renowned organizations such as STMicroelectronics, Institut quantique, McGill University, the National Research Council of Canada (NRC), Tohoku Institute of Technology, Osaka University, and VTT. Most of these partnerships are still ongoing, enabling to prioritize future feature developments and benchmark the code’s performance.

QTCAD has recently been under the spotlight in two scientific papers (published in Solid-State Electronics and Applied Physics Letters) in which the tool played a pivotal role in exploring the behavior of gated quantum dots in a standard-process 28-nm Ultra-Thin Body and Buried oxide (UTBB) Fully-Depleted Silicon-On-Insulator (FDSOI) transistor fabricated by STMicroelectronics in Grenoble, France, and characterized at cryogenic temperature at Institut quantique in Sherbrooke, Québec, Canada. In a nutshell, a realistic 3D Computer-Aided Design (CAD) model of the device was produced directly from its layout according to STMicroelectronics’ design rules; QTCAD was then used to elucidate the electrostatic properties of the structure at cryogenic temperatures and calculate confinement potentials (see figures below). Computing the corresponding electron wave functions led to a quantitative understanding of quantum confinement in the nanostructure, ultimately enabling the identification of design bottlenecks. In the near future, this shall result in improved designs with optimized gate geometries and bias configurations for a technology whose demonstrated performance at cryogenic temperature leads to several promising design applications. 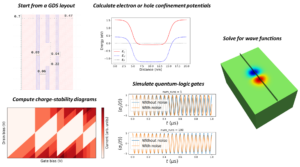 QTCAD is professionally developed, maintained, and continuously improved and supplemented with additional features thanks to user feedback, and a dedicated team of research scientists and software developers. In the next release (v1.2) planned for Spring 2023, the code will be significantly upgraded to improve performance and predictive power for systems containing multiple quantum dots. We are closely working with some beta-testing groups around the planet who will benefit first from these new features. These improvements will include enhanced lever arm calculation features enabling to account for cross-capacitance effects between dots, a streamlined and accelerated workflow for charge stability diagrams in multiple dot systems, a quantum well solver for more accurate description of quantum confinement in source and drain reservoirs, a strain feature required for accurate electronic structure calculations in many state-of-the-art systems such as Si/SiGe heterostructures, and many other useful features which will make QTCAD a unique tool at the leading edge of its market.

Through the development and commercialization of QTCAD, Nanoacademic aims to set the reference for computer-aided design of quantum hardware. Akin to TCAD software in the semiconductor industry, we believe that QTCAD will lead to tighter sample design that will reduce trial and error and shorten prototype turnover, ultimately accelerating the development of world-changing quantum technologies. To learn how to benefit from this unique tool, we invite academic and industrial spin-qubit designers to download our free 30-day trial version available on our Client Portal and get acquainted with the software by exploring the extensive collection of tutorials presented in our online documentation.

Let’s get in touch: please visit us on our website www.nanoacademic.com, our dedicated documentation portal to QTCAD and let’s connect on LinkedIn and on Twitter for more and frequent informational posts and interesting discussions about our software. 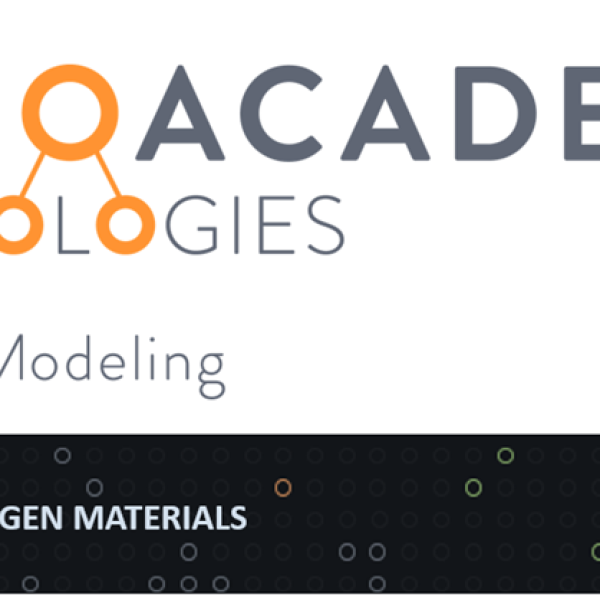