The Quantum Computing Revolution – Part I: The Theory in a Nutshell 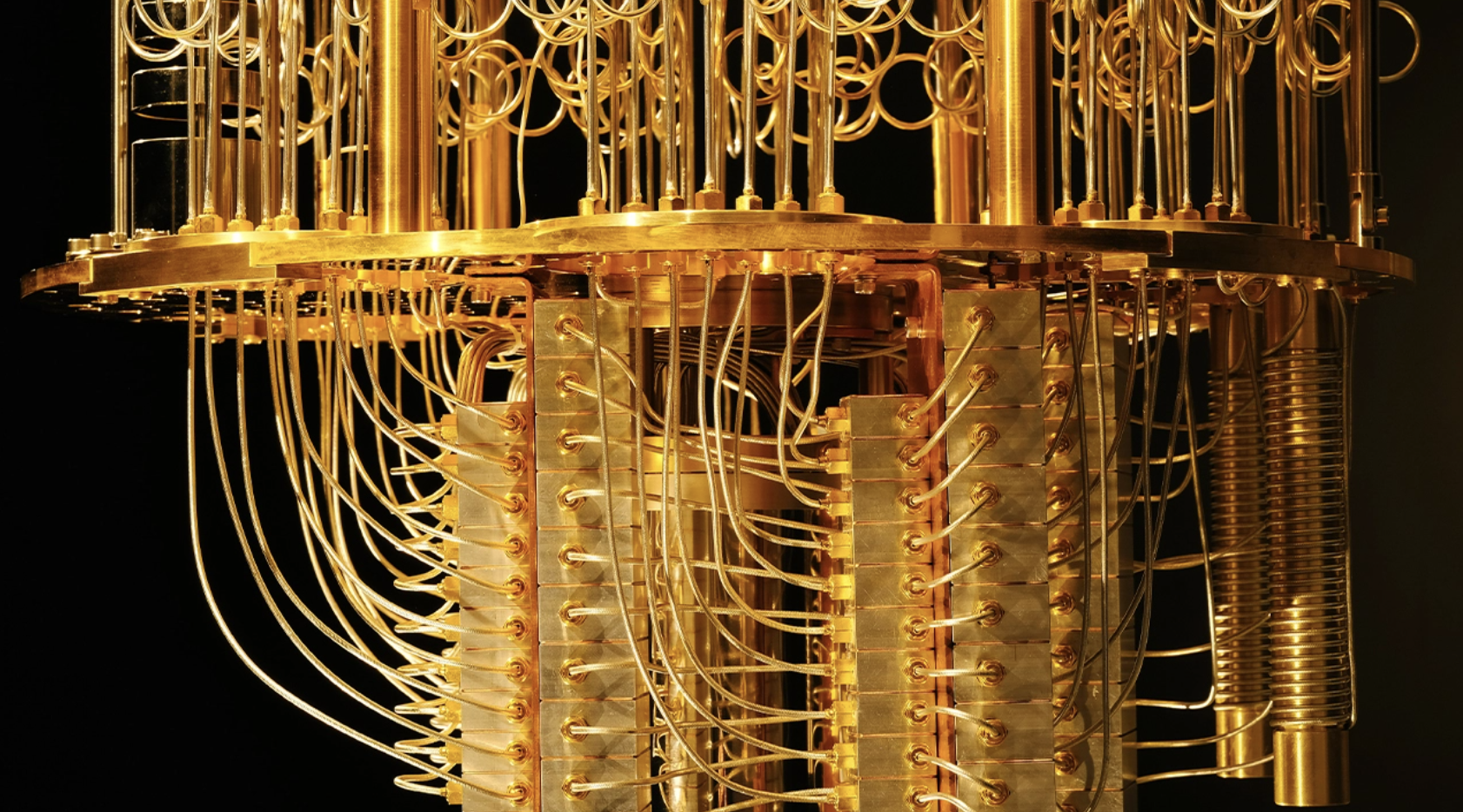 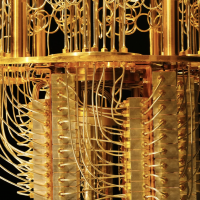 The Quantum Computing Revolution – Part I: The Theory in a Nutshell

It is difficult to overstate the transformational potential of quantum technologies. Advances in the field will have far reaching implications in areas ranging from time-keeping, through imaging and sensors, to communication and computing. Commercial applications of computing might take the longest to realise but we are truly excited by the progress we have seen in the past 24 months.

In the first of this two-part series, we provide an accessible introduction to quantum computing technology and the key challenges it faces on the road to commercialisation. The second part will focus on the anticipated applications, provide an analysis of the activity in the early stage UK ecosystem, and discuss key investment considerations.

1. Premise of quantum computing — it’s all about the qubit

In brief, quantum computing (“QC”) is a technology for storing and processing information based on the science of quantum mechanics.

To understand the basics of QC, it is first useful to go through some of the concepts used in traditional (or ‘classical’) computing. Classical computers use “bits” as their basic data-processing and data storage unit. The storage and computational capacity of a computer depends on its bit count. The supercomputers of today have been made possible because scientists have been able to double the transistor (and thus bit) count per machine every couple of years (Moore’s law has been surprisingly accurate at describing the pace of innovation). However, we may be close to the limit of how small a transistor can be made, which naturally limits further significant computational gains for classical computers.

A key property of bits is that they can only take a state of 0 or 1 at any one time. The basic computational unit of QCs, on the other hand, is quantum bits or “qubits”. Qubits harness the principles of superposition and entanglement to represent data: 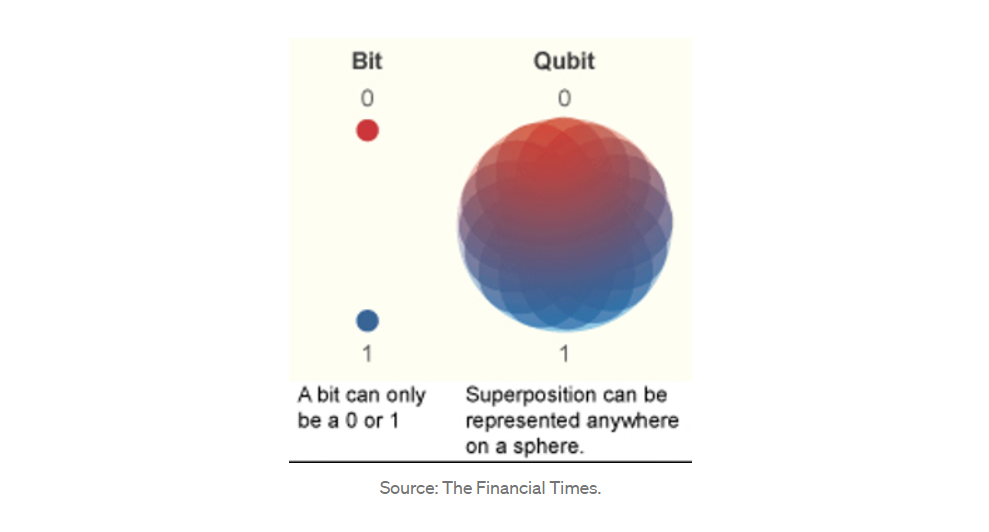 Qubits are probabilistic in nature. They do not have a pre-determined and knowable state. Instead, they exist simultaneously in multiple different states that are said to be ‘coherent’ with each other, i.e. the overall state of the system can be mathematically represented as a sum of all the individual states:

The main advantages of QCs vs. classical computers relate to superior computational power and, by implication, superior problem-solving capabilities (both faster and more complex) enabled by manipulating information using qubits.

However, we should emphasise that the ‘superiority’ is dependent on the particular problem and use case, i.e. QCs are unlikely to replace classical computers completely. Instead, as discussed in the second article in this series, QCs will excel at particular problem types and due to their unique properties will enable us to solve new types of challenges.

The following table provides a comparison between classical and quantum computing.

To illustrate the transformational potential QCs could have, consider that the processing power in a smartphone equates to 10–15 qubits, a high-end laptop is equivalent to about 25–30, while the most advanced supercomputers could be matched by 50 qubits. QC prototypes with 50 qubits already exist but these tend to be unstable and prone to errors.

2. The QC stack — a new approach to software and hardware development required at every level

The QC stack is analogous to the one used in classical computers. However, a new approach is needed at almost every level.

Quantum Computing: Progress and Prospects by Emily Grumbling and Mark Horowitz provides an excellent overview of the QC stack. The schematic below illustrates the high level components of a QC hardware (beige) and software (purple) stack.

Starting with hardware, the quantum processor consists of both classical and quantum technologies housed in four layers:

The hardware would be practically useless, unless a software layer is developed to translate application commands into a machine-readable code. The software stack for QCs has three high-level components:

Current state-of-the-art quantum devices require significant optimisation. Algorithms are often designed for and individually optimised to the specific hardware implementation. Hence, software and hardware development is performed concurrently. In fact, the vast majority of hardware manufacturers started off by adopting a full-stack approach, i.e. taking ownership of both hardware and software. This is not too dissimilar to the way classical computers evolved in the early days of their development. We expect increasing specialisation to occur over time for QCs too.

The inherent properties of quantum mechanics that are key to the potential power of QC also make such machines incredibly difficult to build, control and scale. While the scientific theory behind QC began to formalise in the 1980s, these are still early days for the technology.

There are four constraints inherent in the design of a QC:

Maximising coherence times (stable qubits) while minimising error rates is key to the development of a universal QC. However, both are difficult to maintain with scale. Scientists are experimenting with several qubit technologies to help solve the challenge.

4. Qubit architecture — no winning configuration yet

Consensus is still lacking on the most effective qubits technology. Research from academics and corporates focuses on several different types of qubits 1) Superconducting, 2) Ion Trap, 3) Photons, 4) Quantum dot, 5) Neutral Atom, and 6) Topological. Superconducting and Ion Trap qubits are the most popular technologies employed currently but they face serious scaling challenges.

The details of the various approaches are beyond the scope of this introductory overview, but the table below provides a comparison of the most important characteristics.

The special properties of qubits are theoretically sound but volatile and therefore particularly difficult to preserve. Current consensus suggests scientists are at least 10 years away from creating a resilient control environment that minimises errors and maximises coherence time at scale. Effective error correction techniques have been introduced in small quantum devices to improve qubit quality and coherence but the power of these machines has not been sufficient to deliver exciting use cases. Without scale and greater control, QC are unlikely to live up to the promise of unleashing a new paradigm of commercial applications.

That said, as discussed in Part 2 of this series, NISQ (noisy intermediate-scale quantum) machine could provide useful applications on a shorter time frame.

The second part of this series will explore potential applications for Quantum Computing, as well as the commercial progress achieved to date. Stay tuned.

We’d like to thank Andrii Iamshanov (AegiQ Advisor), Ilana Wisby (CEO of Oxford Quantum Circuits), Max Sich (CEO of AegiQ), and Richard Murray (CEO of Orca Computing), whose feedback and guidance contributed to the above work. 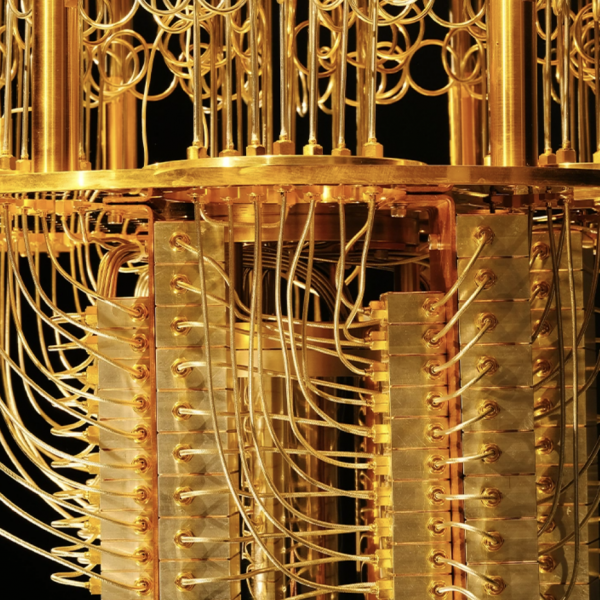