This is a living article which we will keep up to date for corrections and latest developments and if you have comments you should email us at hello@thequantuminsider.com

A short introduction to qubits

Before we cover ‘qubits’, it’s worth reminding ourselves what ‘bits’ are. A bit is the smallest unit of information used in traditional or ‘classical’ computers and can be in one of two states (we call these states 0 and 1).

Qubits are the basic unit of quantum information which we explain in more detail here. These can be represented in a number of ways, just like bits.

What makes a good quantum computer

This is a complex field so we have tried to focus on the key focus areas.

Its qubits stay coherent for long periods of time. We can only leverage the quantum mechanical properties of qubits whilst they are coherent. This is when their state is still in Superposition – i.e. hasn’t collapsed to zero or one which is known as decoherence. Decoherence is caused by the qubit interacting with the outside world, and explains why much of today’s quantum computers are large engineering feats – much of the work goes into keeping qubits isolated from the outside world.

Its qubits are highly connected. This generally refers to different particles having correlated quantum states, known as Entanglement. This allows operations to act on multiple qubits and increases the information density of a quantum computer.

Note: there’s a conflict between trying to keep qubits isolated from the outside world while ensuring their connectivity.

Note: To get a feel for how these factors interact with each other you can observe that Superconducting implementations have shorter qubit lifetimes but faster gate operations than Ion Traps.

Operations achieve high gate fidelity. Classical computers use electrical signals that represent bits that are zero or one. If the signal experiences noise (e.g. from heat) and the signal doesn’t represent precisely zero (for the sake of argument let’s say 0.0004), then it’s easy to attenuate the noise so that 0.0004 is treated as zero. Qubits need to precisely represent numbers (or more strictly amplitudes!) that are not just zero and one, so it is not possible to attenuate noise in such a way. The more logic gates you add to a quantum computer, the more noise builds up (which by definition cannot be attenuated). Therefore a good quantum computer demonstrates high gate fidelity where information is precisely preserved between operations.

High degree of scalability. We have left this until last to highlight that much of the factors above pertain to the inherent “noise” that must be grappled with in quantum computing systems. Quantum Computers will only be useful if we can achieve high gate fidelity and connectivity. Much research is going into understanding how to reduce noise through error correction. Once we have worked out how to build noise-free qubits (known as logical qubits) a key focus of further development will simply be on how we can scale up quantum computers to include more qubits (whilst preserving connectivity and minimising noise).

The below table summarises which companies are working on which implementation and explicitly excludes research initiatives. TQD has mapped out the entire QC market in detail including hardware, software and specific applications. Please contact us at hello@thequantuminsider.com for more information. 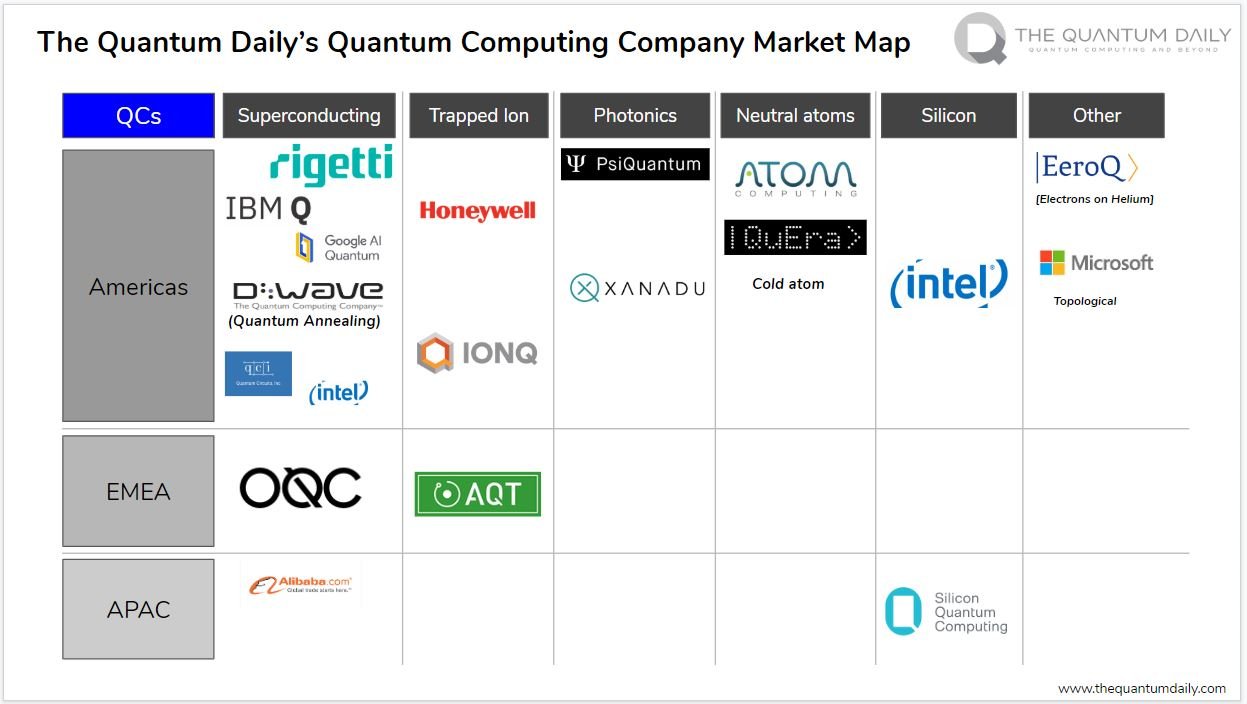 “After the discovery of Shor’s algorithm in 1994, serious efforts were launched to find an adequate physical system in which to implement quantum logic operations”

What: Superconducting qubits are implemented by placing a resistance-free current in a superposition state, using a microwave signal, as it oscillates around a circuit loop. This qubit implementation is the most common, and is the main focus of IBM and Google’s universal quantum computers (among others).

Pros: Superconducting qubits have fast gate times (faster operation time), meaning similar computations can be performed much more quickly than on other qubits (e.g. Ion Trap). This is important since useful quantum computations will likely have millions of logical gates (operations). Additionally, the technology behind superconducting qubits can take advantage of existing methods and processes (such as printable circuits) that we have already spent decades improving. As a result it is easier to envisage a scalable superconducting quantum computer than with some other existing methods.

Cons: Superconducting qubits have fast decoherence times, meaning their ‘memory’ is very short lived and we need more error correcting qubits to compensate. Since superconducting qubits can normally only interact with the handful of qubits next to them on the device, we need extra operations to perform most algorithms. They also must be kept very cold (below 100mK, or 0.1 degrees above absolute zero) which can be expensive and inconvenient. Finally, each superconducting qubit is slightly different and must be calibrated which could cause problems on larger systems.

Did you know? The qubits being used in IBM’s chips are superconducting transmon qubits. ‘Transmon’ comes from plasmon qubits and the transmission line added to disperse troublesome low frequencies.

What: Ion Trap quantum computers work by trapping ions (charged atoms) using electric fields and holding them in place, the outermost electron orbiting the nucleus can then be put in different states and used as a qubit.

Pros: A big feature of Ion Trap computers is their stability; the qubits have much longer “coherence times” than those used in Superconducting quantum computers. While an Ion Trap computer can operate at room temperature, to get the best performance the ions need to be cooled, but not to the extent a Superconducting quantum computer requires. The connections between Ion Trap qubits can be reconfigured meaning each qubit can interact with each other qubit in the computer, avoiding some of the computational overhead found with superconducting chips.

Cons: Ion trap computers are generally significantly slower than their superconducting counterparts. While they do not need to be kept as cold, the ions do need to be in a high vacuum. The technology involved in creating ion traps is not as mature as with superconducting qubits, we will need to see large improvements in the area before we can imagine a scalable system. Building a Ion Trap quantum computer requires integration of technologies from a wide range of domains, including vacuum, laser, and optical systems, radio frequency and microwave technology, and coherent electronic controllers.

Did you know? The first quantum logic gate was demonstrated in 1995 using trapped atomic ions.

Pros: The main advantage marketed by industry players is that this implementation does not require extreme cooling, and thus allows for more energy-efficient computation. In addition, given the use of silicon chips, the approach is seen as highly scalable (as it can use existing semiconductor industry infrastructure) rather than having to develop new atomic-scale fabrication techniques.

Cons: The technology is still nascent and key areas such as qubit connectivity are to be demonstrated.

Did you know? PsiQuantum has raised ~$230m to develop its Photonic technology.

What: Neutral atoms are a similar approach to Ion Traps but instead of using ionized atoms and exploiting their charge to hold the qubits in place, neutral atoms and laser tweezers are used.

Pros: Neutral atoms benefit from the same long coherence times as ions (used in Ion Trap quantum computers). Its unique feature compared to Ion Traps is its potential for building multidimensional arrays. You can read more in our exclusive interview with the CEO of Atom Computing.

Cons: Scaling up a neutral atom system faces the issues that arise when scaling a trapped ion computer. This approach continues to be highly nascent.

What: Artificial atoms made by adding an electron to a small piece of silicon. Microwaves are used to control the electrons state.

Pros: If successful, this approach should allow for longer coherence times than the superconducting approach. Working with silicon builds on decades of research from the existing semiconductor industry.

What: Ah the mysterious topological qubits… These operate on a different principle to the other qubits we have outlined. Topological quantum computing seeks to implement a more resilient qubit by utilizing non-Abelian forms of matter to store quantum information. Non-Abelian forms of matter are quasiparticles, like Majorana Fermions and Anyons (non-Abelian quasiparticles who are neither bosons or fermions). The most promising topological quantum computing developments derives from a non-Abelian braiding of chiral Majorana Fermions by Quantum Dots. The type of anyon needed to create a universal quantum computer have not been experimentally confirmed yet (but we have some tentative signs). For now, this model of quantum computation is purely theoretical.

Who: Microsoft has been researching Topological Qubits for a number of years.

There are many ways of implementing qubits and the list above is a selection of the most known rather than an attempt to be exhaustive. We have aimed to distill this into a digestible summary (building on BCG’s great table), based on a review of existing sources and discussions with experts in the industry, which we will keep up to date as a live resource.

If you have edits or amendments please submit to hello@thequantuminsider.com with the appropriate paper or link as a reference.